The oracle of Delphi has spoken

According to Greek Mythology, Delphi was the centre of the earth, as determined by eagles sent forth by Zeus himself, and was home to the Delphic Oracle. According to TripAdvisor, it is also the 76th best rated restaurant out of 160 in Durban (in its defense it has a 90% recommendation rate based on only 11 reviews), and is home to some of the best Greek food in Durban. 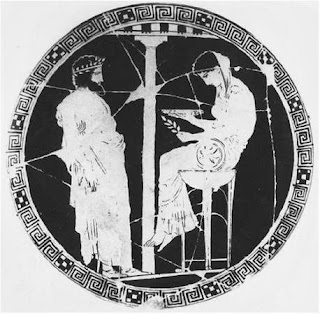 Delphi (they spell it Delfi) is found in Lilian Ngoyi (Windermere) Road in Morningside, and is housed in an unprepossessing building just off the road. When we visited, the place looked a little like the temple of Apollo with its tumbledown columns - the wind had recently blown down their patio roof.

Perhaps fortunately, I had forgotten my camera, as the interior is very Greek-kitsch, with lots of checked table cloths, faded posters, chipped plates on the wall (memorabilia from a big plate smashing night?) and tastefully arrayed plastic grapevines.

The wine list is on the minimal side, but luckily I had come prepared with a bottle of Waterford Rose-Mary in the boot, and their corkage is a very reasonable R15.

The place seems to do very well out of repeat business, which speaks well for it - there was much hugging of the owners, and plenty of people seemed to know exactly what they were going to order. It's a small restaurant, with only room for 6 or 7 tables.

We ordered the meze platter for starters, as well as a portion of squid heads. The platter was the highlight of the whole meal, and featured fantastic eggplant, saganaki, kofta and dolmades. The squid heads were decent, but not as good as some.

The main course was less inspiring - my lamb shank kleftiko was very tender, but a little flavourless, with a thick, sticky gravy which did not add greatly to the experience. The side dish of rice was also cooked with frozen peas and carrots, a pet peeve of mine. The chicken souvlaki was served in a pita and was fairly good, but also lacked real depth of flavour, focusing mainly on garlic, with few other tastes coming through. I felt that it could have used more tzatziki, lemon, dill or mint.

Dessert - the halva and icecream was delicious - I need to make this at home, but the galaktoboureko was also a little plain. The less said about coffee the better.

Overall - it's a cheap and cheerful spot, with simple, hearty fare on a road with several other restaurants. If in doubt, pop in for the meze, and if nothing else takes your fancy - go for a roving dinner.
Posted by Unknown at 10:24 PM 1 comment:

This little piggy went to Market

When we arrive at Market for a leisurely brunch they are only just opening up at 9am, but Durban is like that. The place is well hidden, with a narrow pathway beside a fairly nondescript building in Gladys Mazibuko (Marriott) Road leading into a rather lovely courtyard. 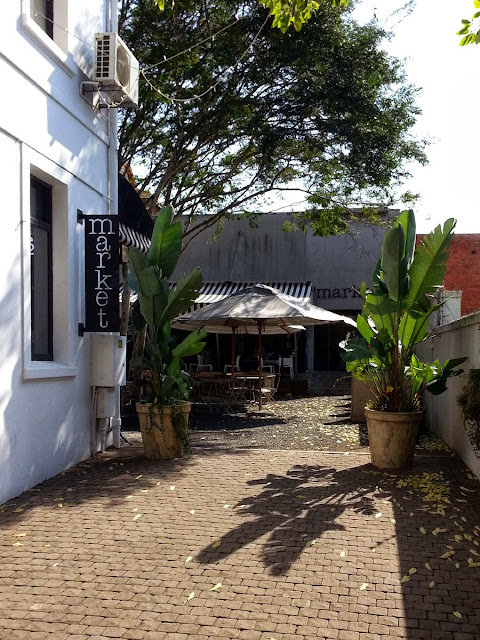 Beneath the trees, the gravel is scattered with fallen leaves. A bulky lady squeezed into a regulation maid’s outfit is attempting to gather them up with a rake. She is assaulting the leaves with relentless strokes, and moving more stone than leaf in the process. The source of her frustration is a ring of graceful Leopard trees surrounding a small stone pond. The pond features a fountain, which is anaemically pulsing tepid water through the moist air down to the koi that circle below. A man in tight fitting yellow pants and a white, v-neck that shows off his tattooed arms, carefully measures out a single scoop of pellets for the pond’s gaping inhabitants. Judging by his proprietary air, he is the owner of the fountain, the trees, and the restaurant that they form part of.

At the table next to ours, a young couple takes their seats. She wears an orange sheath that complements her obvious fake tan, and the too-thick makeup which covers her face. Despite the breakfast hour, she has obviously spent time preparing her eyelashes, which are too long to be real and must have been meticulously applied with adhesive, like some kind of disguise. Her boyfriend is explaining something obvious to her, in an unconsciously condescending fashion: ‘No you have to go into the bank to change your account limit… No, they won’t let you do it online’. She looks admiringly at him, impressed by his mastery of the self-evident.

‘Are you ready to order?’ Our waitress has taken her style cues from the restaurant owner, or perhaps there is a dress code – like him, she has a collection of tattoos, Cyrillic script on the forearm, a religious symbol near her shoulder, and a fairy that adorns her ankle. We order drinks: freshly squeezed carrot and orange juice with extra ginger, and later, coffee. Both are excellent. 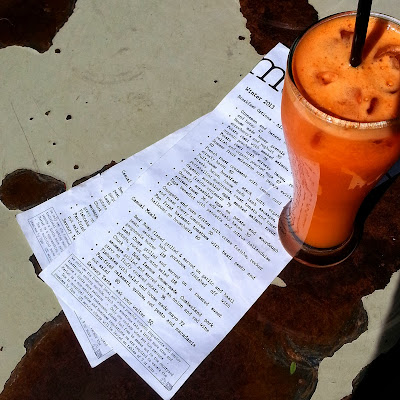 For brunch we order croissant French toast with lemon curd and crispy bacon, and a potato rosti, salmon, crème fraîche and poached egg combination. The croissant French toast is so good that I have taken to making it at home. The unusual pairing with lemon curd is fun, tasty and different. The rosti is equally good - a fairly regular breakfast arrangement, but the proportions of egg, salmon and crème fraîche are just right, making the medium sized portion sit perfectly - not too heavy, not too light. 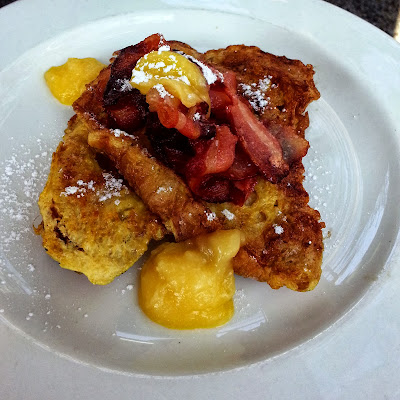 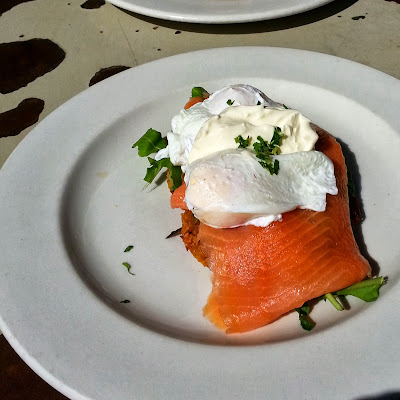 As we eat, we watch the couple next to us and attempt to guess at their relationship. Now they are asking each other what type of music they like, what TV shows they watch. Is it a first date? Perhaps she has slept over at his place, and is wearing her makeup from the night before. He outlines for her his plans for workplace success: ‘I just need to score a couple of big deals’, he says, ‘then I’ll be ready for promotion when he retires’. She makes supportive noises, but seems more interested in her breakfast (she has also gone for the rosti with salmon and poached egg).

Before leaving we explore the retail space opposite the restaurant. Called Shoppe, it is full of art, ceramics and furniture from South African designers. They stock Lisa Firer, Sootcookie and many other artists, and the shelves are full of beautiful items that you normally see only in decor magazines. Think of it as dessert. 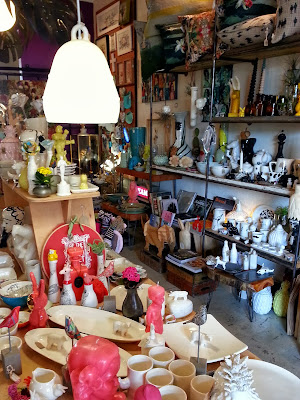 Posted by Unknown at 9:38 PM No comments: