A lot has been written about 9th Avenue bistro (almost all of it good), now open for almost thirteen years, and consistently considered one of Durban's best restaurants.

Like many excellent restaurants, it is more concerned with the food than with the exterior view, and is found in the Avonmore Centre in Morningside, an unremarkable location with an inadequate parking lot and a view of... well, just the parking lot really. Having said that, the place has undergone a revamp sometime in the last year or so since we last visited, and the interior is no longer entirely minimalist. A small, enclosed terrace is lined with accents of raw wood, and the interior is painted in cool grey tones. A feature wall carries a collection of paintings and photographs of aloes while the opposite wall holds some of their excellent wine collection. Simple hanging bulbs create a welcoming light, and my only quibble with the interior was the use of plastic flowers (fake protea pincushions) on a high shelf.

The wine list is short enough to read through, but long enough to mean business, and includes offerings from several boutique Cape wineries. We ordered a bottle of Sauvignon Blanc No 7 from Hermanuspietersfontein, a winery we were lucky to visit earlier this year. Platter's gives it four stars - I give it a delicious.

The menu itself is tight and focused, with around ten starters and ten main courses over two pages. We didn't get to dessert on this visit (birthday cake!) so no comments on that front. Prices are on the steep side, but in line with the level of service. 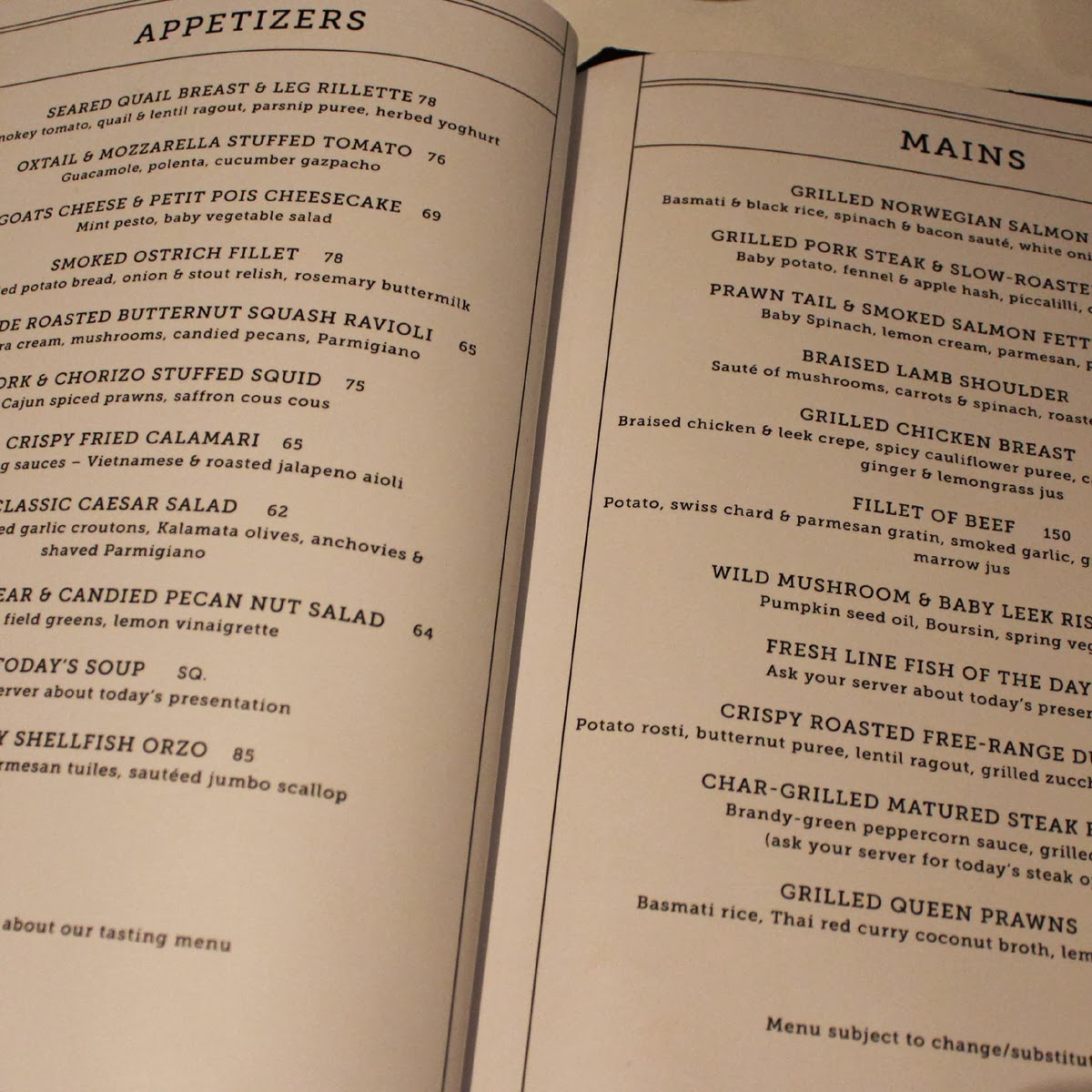 To begin, we selected the pork and chorizo stuffed squid and the crispy fried calamari, which seemed a good combination. The calamari was tender, well battered, hot and delicious and came with two dipping sauces, a Vietnamese and a roasted jalapeno aioli. Both sauces were tasty, but didn't do full justice to their names - they could equally well have been described as a soy sauce and a chili mayo - it would have been good to taste some real smoky flavours from the roasted jalapenos. Presentation was on a wooden board, which I liked, sitting on a paper serviette, which I didn't (soggy serviette, bad). 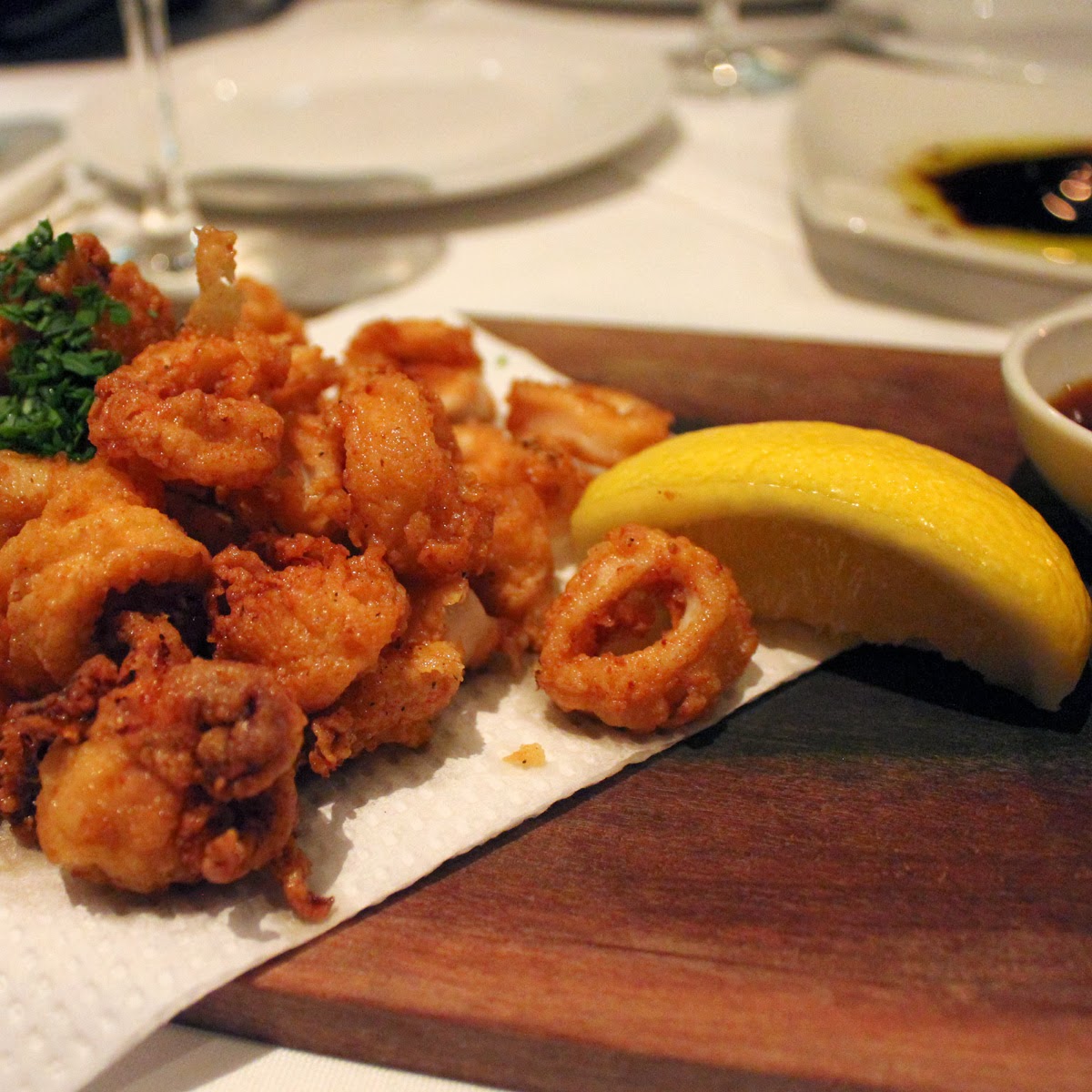 The squid was artfully presented, the plate painted with squid ink and piled with a rustic couscous, the stuffed tubes, a scattering of Cajun prawns and a dusting of some kind of powder in one corner, which looked good, but was almost flavourless. The pairing of pork and squid was great - although I think that can be said of all pork pairings (bacon chocolate anyone?). 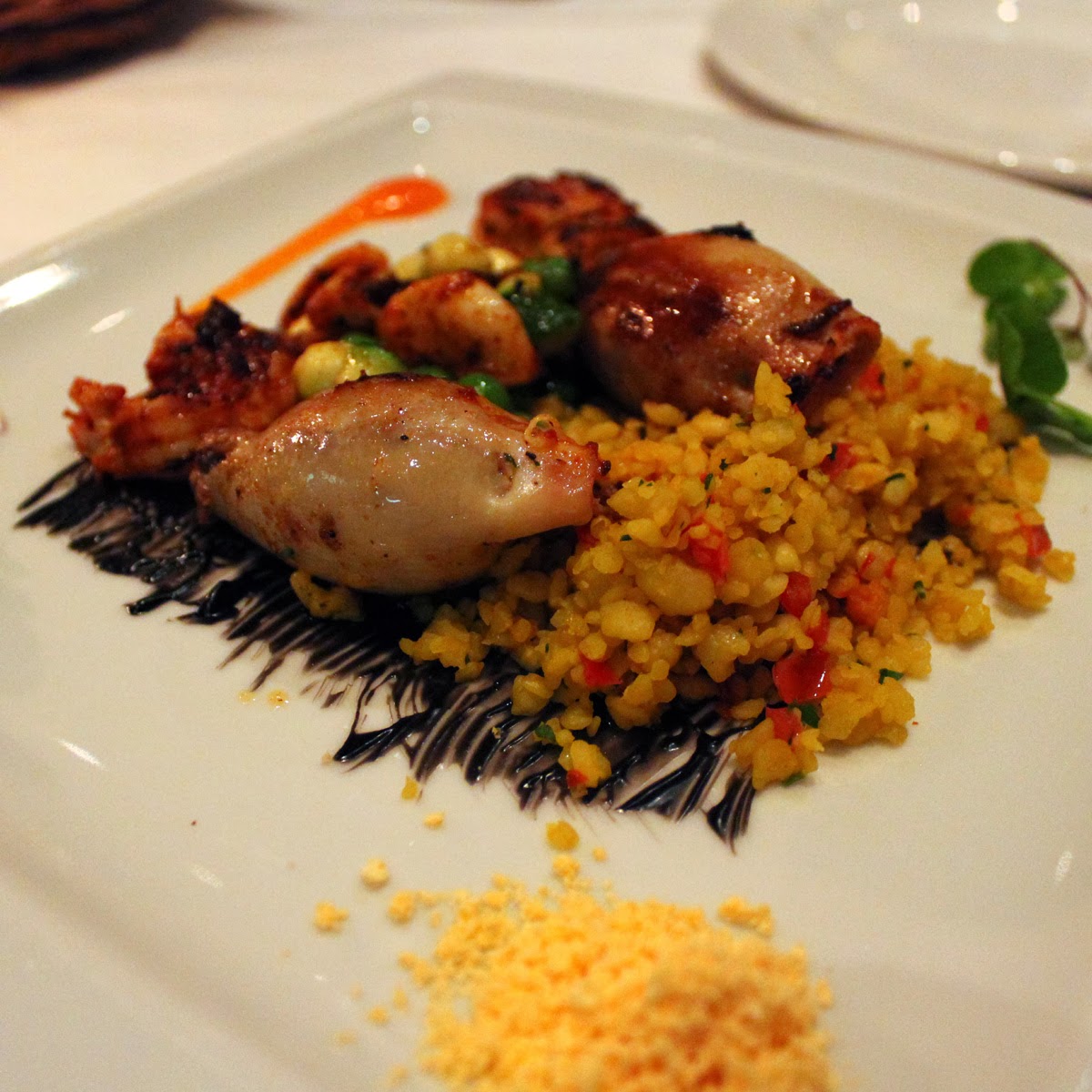 We were well satisfied with our starters, as were the majority of the table, with the exception of the soup of the day (field mushroom) which was rather weak - blandly presented and thin.

Main course was a tough choice, with the pork belly and duck options vying for attention. In the end I went off menu for one of the nights specials: suckling pig (under three months old - I asked, and then felt guilty), roasted whole, pulled off the bone and packed into a slab, topped with crackling and served with a warm salad of potato, apple and basil and a roasted carrot. 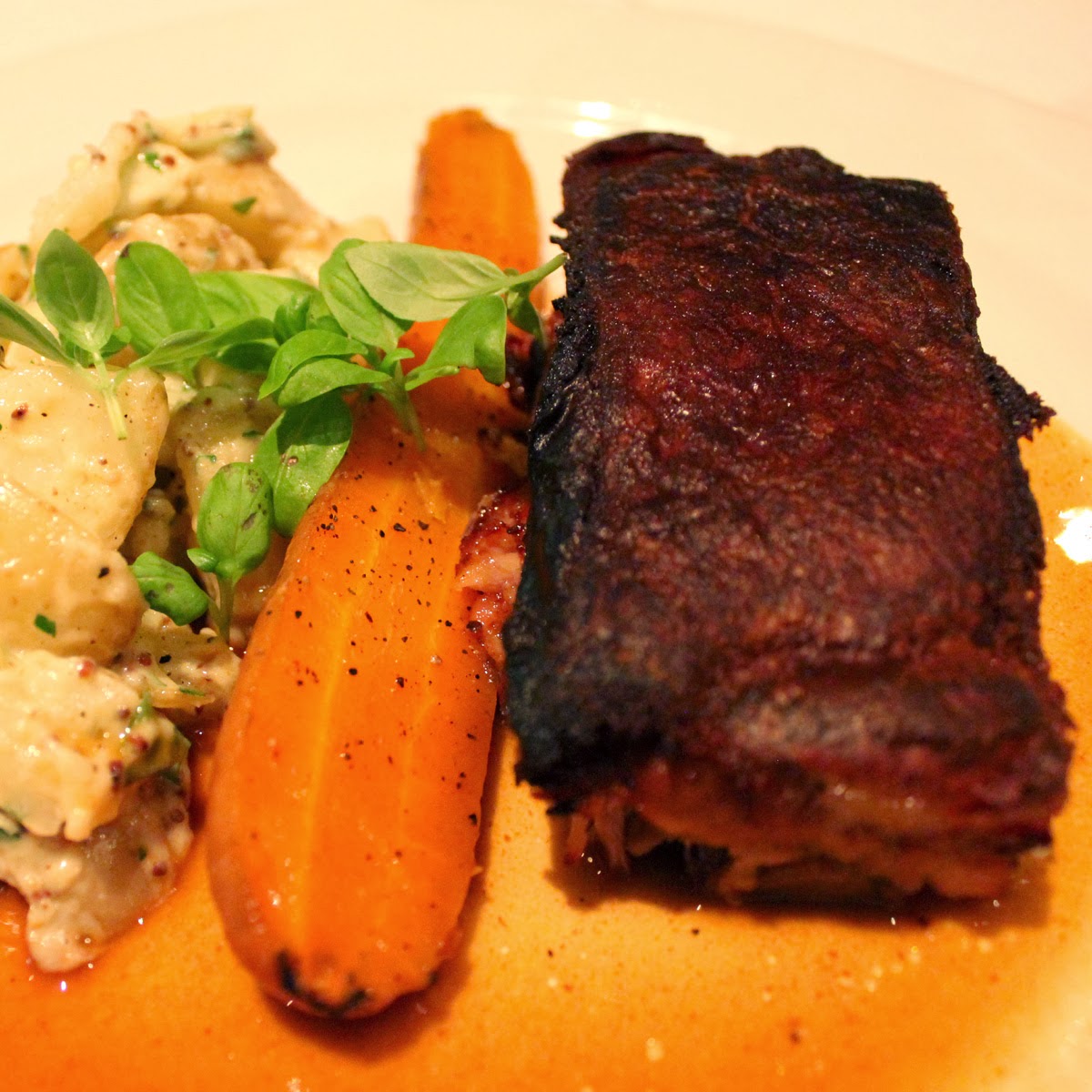 The picture doesn't do it justice - it was one of the most wonderful things I have ever eaten. The shredded pork meat was amazingly soft, with just the right proportion of fat, enough to carry the wonderful flavours, but not enough to overpower the senses. The highlight, however, was the crackling, which was thin, crisp and yielding, unlike some crackling, which can be hard enough to break a tooth on. The side salad nicely balanced the pork, with just a hint of apple with the potato. By the time I was done, nothing was left on the plate, and I was sorely tempted to pick it up and lick off any remaining sauce.

I have mentioned before my misgivings about ordering risotto (too often underdone). Happily, 9th Avenue's effort was spot on, with tender, gooey rice, subtly flavoured with leek, mushroom and soft cheese. The risotto was served with 'spring vegetables', which turned out to be asparagus, grilled courgette and peas - simple, tasty, and a welcome improvement on what normally passes for vegetables at most restaurants. 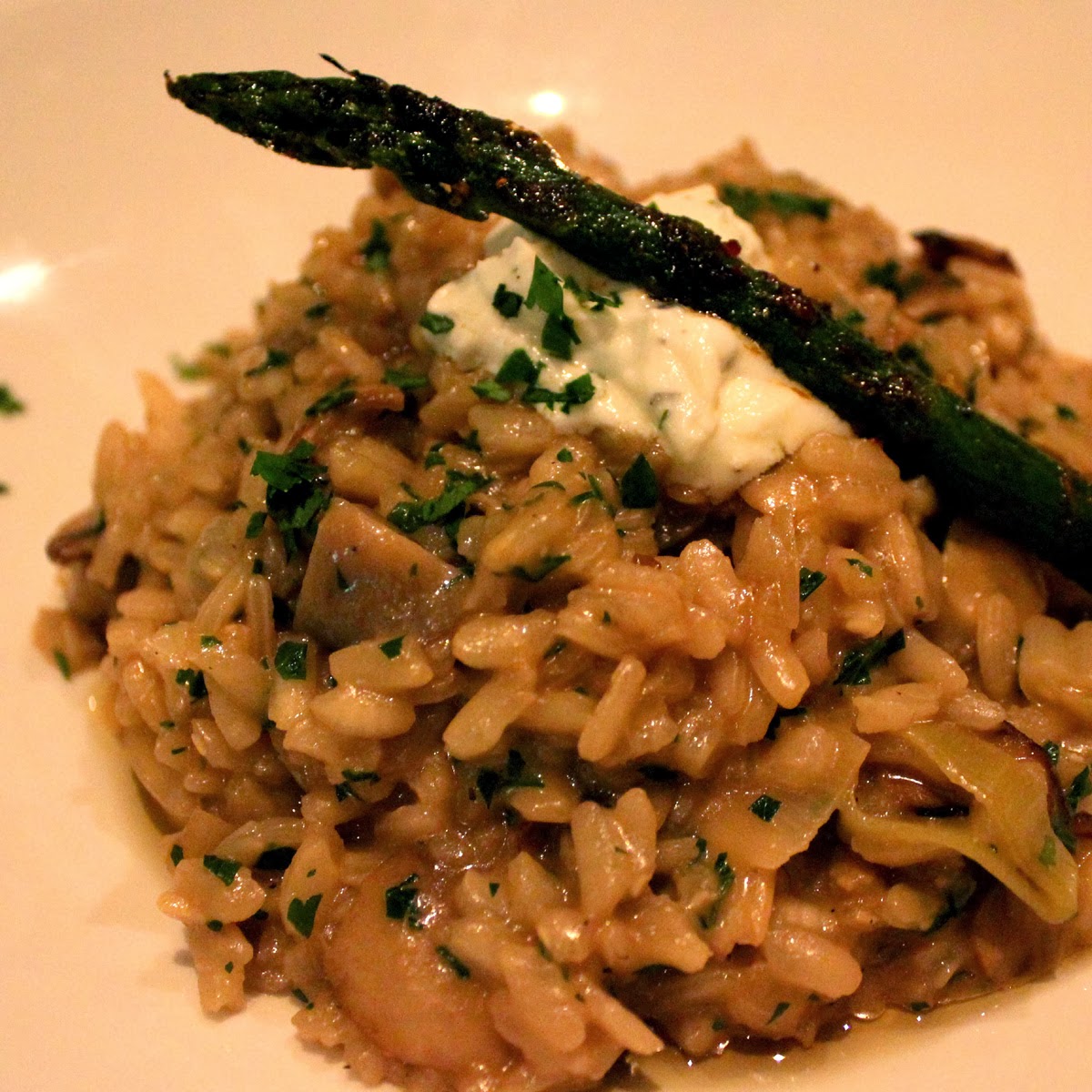 As we were visiting to celebrate a friend's birthday, we ended the meal with a delicious birthday cake, along with coffees (small and strong). We will have to visit again soon to review the desserts...

Thai is a difficult language, with a pretty incomprehensible script that makes for cool tattoos, but does not facilitate easy understanding. Having said that, apparently the word 'aroy' (phonetic spelling, obviously) means 'tasty', which is why you see it mentioned often around Thai restaurants.

Aroy Thai in Westville, is definitely living up to its name. It's a small, fairly nondescript restaurant tucked into the Engen Centre, a strip mall on Rodger Sishi Road which also houses a Food Lover's Market and the A Tasca restaurant.

When visiting Thailand, I found that the ornateness of the decor was inversely correlated with the quality of the food, and the same holds true here. Inside Aroy Thai, simple plastic tables and chairs, tiled floors and office-like ceilings are the perfect complement to fantastically tasty Thai food.

As it was our first visit, I wanted to try the Tom Yum soup, which to me is the acid test of a Thai restaurant's quality. Too often in local establishments the hot and sour flavours of a good Tom Yum are dumbed down to an over salty broth housing a few sad prawns. Happily, this was not the case here. The soup, when it arrived, was a beautiful sight with a bright red-orange slick covering the broth and islands of dried chilli, spring onion and mushroom peeping above the surface. Diving deeper there were plump prawns to be found and flavours of lemongrass and lime leaves. 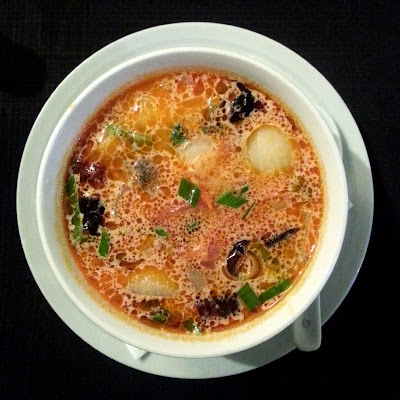 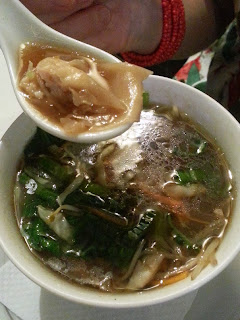 We also tried the wonton soup (the restaurant does several Chinese influenced dishes) and found it equally good, with delicious, fat dumplings.

We washed down out starters with Singha beers - Aroy is licensed and has a reasonable selection of beers as well as a small wine list.

Continuing with the classics, I wanted to taste the Pad Thai for my main course. We selected calamari as the protein, but were somewhat disappointed, as the dish was rather bland, with not enough fish sauce or shrimp paste to impart a good umami. We requested additional chilli, which arrived in a dried, powdered form, and improved matters somewhat.

Luckily we also ordered the creatively named 'Duck in a Jacket' which consists of a half duck, deboned and wrapped in a pancake. The owner (a Thai lady) clearly thought that this was a good choice, and seemed pleased that we had ordered it - perhaps next time we visit I will ask her to choose a selection of dishes for us.

The duck was crisp and dark skinned, wrapped in an egg-rich pancake and drenched in a sticky and sweet sauce that went well with the salty duck. Definitely a dish that I would order again. 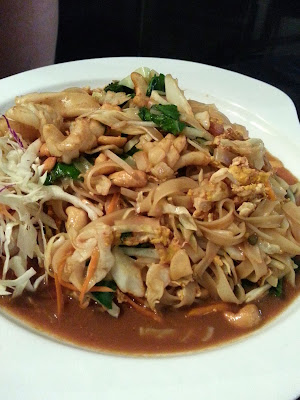 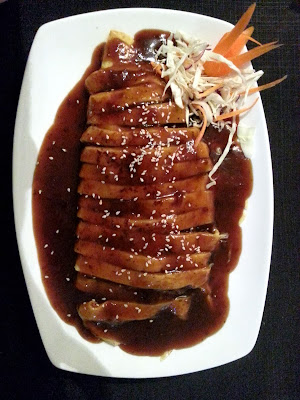 Like most Thai restaurants, there were limited desert options, and we opted to buy a bag of White Rabbit candies on our way out instead.

With an extensive menu still waiting to be explored and three out of four excellent dishes on first attempt, Aroy Thai holds a lot of potential. Sushi is also served, and several patrons were eating it - it looked pretty good. They also do takeaways.

'Gin khao reu yeung?' is another useful Thai phrase. It's used as a greeting, similar in meaning to 'are you well?', but literally means 'have you eaten rice yet?'. I like the priorities the Thai have. 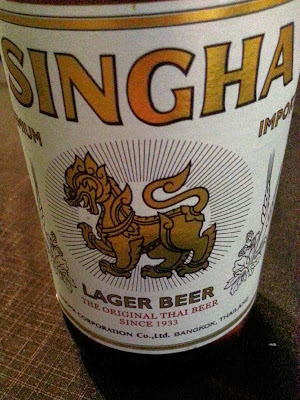